log in
Here's the speech by Webb-site founder David Webb to the crowd in Admiralty last night.

The following is the text of an address by Webb-site founder David Webb to the protesters in Admiralty on the evening of Saturday 11-Oct-2014:

Hello Hong Kong! Show me some light [smartphone LED]. You are the stars!

Hong Kong is Asia's World City, isn't it? Do we love Hong Kong? Say Yes! Say Hello World! Are you patriots? You are all qualified!

I have lived in Hong Kong for 23 years since 1991, which is longer than many of you have been alive. Hong Kong is my home. I have spent the last 16 years trying to make it a better place for all of us, and I will never stop trying.

We have one of the world's leading financial centres. The Government claims to believe in free markets and competition, but where is the free market in leadership? Competition between candidates and their policies is essential for the healthy development of our economy.

Don't worry about the small economic impact of these protests. Think about the large economic benefits of a more dynamic economy, ending collusion between the Government and the tycoons who currently elect the Chief Executive. When 70 old tycoons visit Beijing for instructions, you just know something is wrong. It should be the Great Hall of the People, not the Great Hall of the Tycoons.

A free market for the Chief Executive really is not too much to ask.

Beijing raised the nomination threshold from one eighth to 50%, making it four times harder for a candidate to get nominated. Is that gradual and orderly progress? Of course not, it is a great leap backwards.

The people of Hong Kong don't want independence. We just want to elect the Government of our very special administrative region in China. We want it to be the People's SAR, in the People's Republic of China.

Under the Basic Law, China can even refuse to appoint the elected leader, if it wishes, and if it dares. 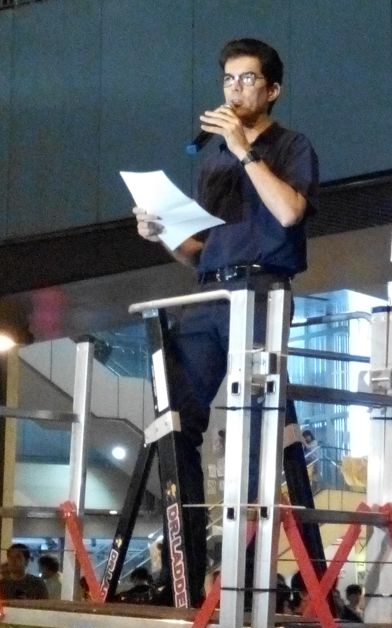 Fellow citizens, I admire your courage, your strength, and your persistence. Night after night, you have come out to tell the Government what you believe. They said you were fading away. Last night you proved them wrong. Let's make every Friday Democracy Friday!

The Chief Executive has one last chance to regain your respect. Leung Chun Ying, if you are watching this in your hotel room in Guangdong - oh wait, you can't, can you? Well if you can hear us, you must file a new report to Beijing, on the "Actual Situation in Hong Kong", and you must recommend true universal suffrage. And if Beijing loves Hong Kong as much as we do, then it will grant us true universal suffrage.

Look around you tonight. This is real. This is the "Actual Situation in Hong Kong". Without democracy, no Chief Executive, whoever she is, will have a popular mandate, and we cannot resolve the deep-rooted problems of Hong Kong, and these protests will happen again and again.

If you are a university student, as I once was, then please, keep protesting, but also keep studying. You owe that to the people of Hong Kong who are subsidizing your education. Not every person your age has the brains and the privilege to go to university. Most people your age already have to work. Make the most of your brain. Go to your classes, and come to protests after class - you will need your education, because you are today's students but you are tomorrow's leaders.

The battle for democracy may not be won overnight. It may be a long battle, but I have no doubt, no doubt at all, that we will eventually win, and Hong Kong will be a better, fairer and more harmonious place.

There is no large economy in the world with high levels of prosperity that does not have democracy. So if China wants world-class prosperity, and not the current 20% of world-class, then it must have democracy and the civic freedoms that go with it. Freedom of speech, freedom of assembly, and freedom of the media. China today is like a leaking boat in a vast ocean of corruption. Arresting corrupt officials will not stop the leak, and eventually the boat may sink. Without increasing prosperity, the one-party state cannot keep the people happy forever. There will be no prosperity without democracy. Where Hong Kong leads today, China will follow in future.

China's leaders need to be smart about that. Deng Xiaoping said, it is OK for some regions of China to get rich before others. President Xi Jinping, you should say, that it is OK for some regions to have democracy before others. Now it is time, it is our time, for Hong Kong to have true democracy, the first region in the People's Republic. We have waited long enough. China should be proud of this. What is good for Hong Kong will eventually be good for China.

Power to the people of Hong Kong!

Thank you for listening!