log in
In an act straight out of George Orwell's 1984, the HK Govt's news agency has been caught modifying and backdating a press release to comply with the Central People's Government's Liaison Office view that it is not a CPG department and not subject to Article 22 of the Basic Law. It actually makes no difference: if the CPG itself interferes in matters which are within HK's autonomy under the Basic Law, then it undermines "Two Systems".

There was political drama in HK this weekend, not just the mass arrest of 15 pro-democracy leaders, but also over whether the Liaison Office of the Central People's Government in the HKSAR (LOCPG) is bound by Article 22 of the Basic Law, which requires in its first two paragraphs:

"No department of the Central People's Government and no province, autonomous region, or municipality directly under the Central Government may interfere in the affairs which the Hong Kong Special Administrative Region administers on its own in accordance with this Law.

Now you might think that a Government web site titled News Archives: Press Release would have a copy of this press release in its archive. You'd be wrong. To find the original press release, we have to go to the Google cache and store a copy in archive.is, so that you can see it when the cache fades.

Instead, in place of the original, there is a revised press release, backdated to the same timestamp of 21:05, in which the references to Article 22 have been removed. The Information Services Department (ISD) of the HKSARG should be renamed the "Ministry of Truth" in honour of George Orwell's 1984, for its ability to change its own archive by overwriting and backdating press releases.

The revised version was issued at 23:47 that night, nearly 3 hours later. Three hours may not seem like much in the arc of history - but there's a principle at stake - what if the Government goes back and modifies public press releases it made last week, last month or last year, altering or just deleting embarrassing older press releases to fit its latest views on important issues?

We only know the time of the second version thanks to a screenshot shown on TVB's evening news yesterday, which gives you a behind-the-curtain glimpse of the Government News & Media Information System (GNMIS), which is available only to journalists approved by ISD with a password. Yes - it's one ISD, two news archives. 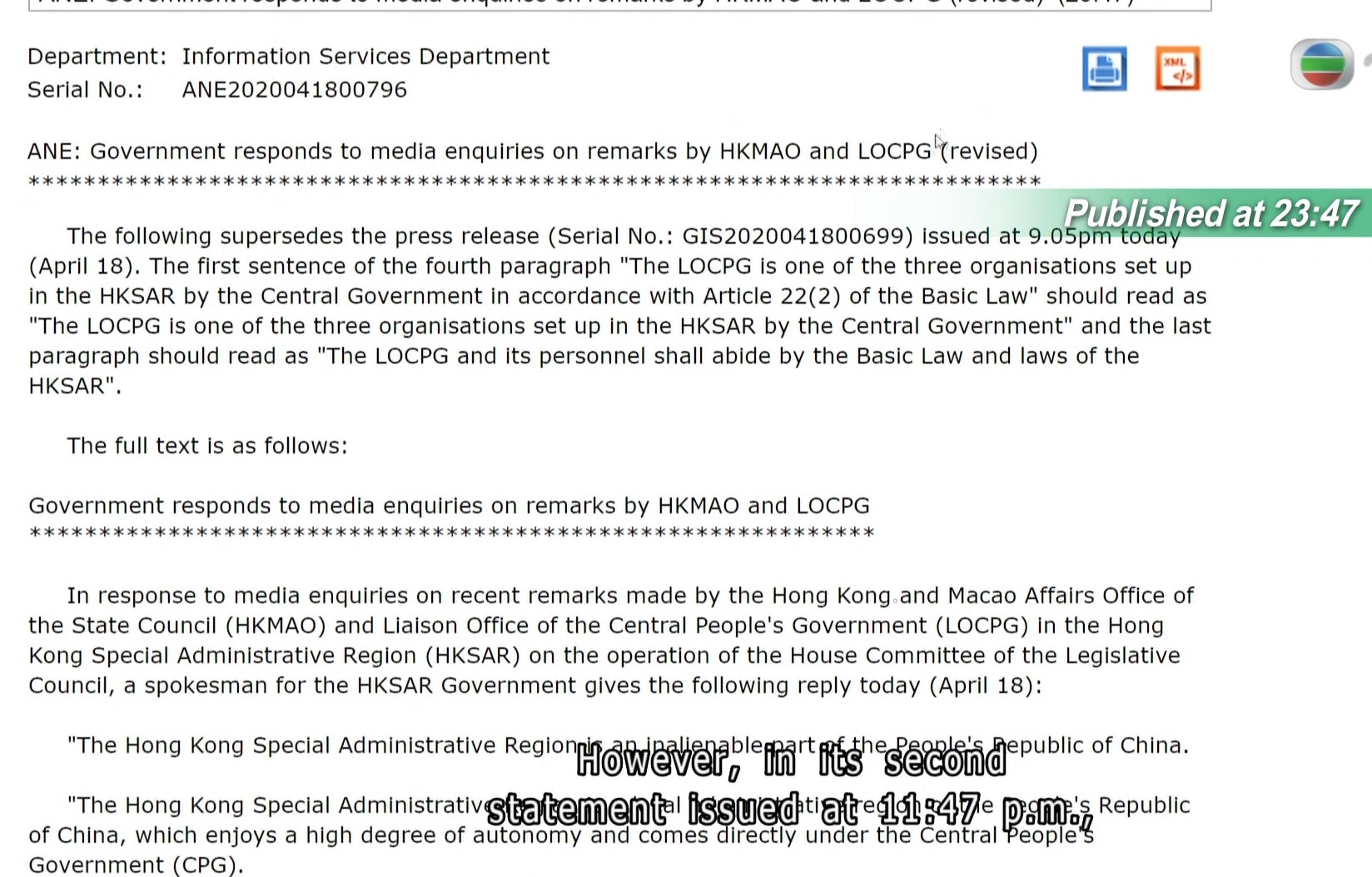 Not only that, but at 01:22 on Sunday morning, while most of us were asleep, the ISD rushed out another press release, clarifying that the LOCPG is not, in fact (or rather, in Orwellian Newspeak) a CPG department as referred to in Article 22(2) of the Basic Law.

That leaves us with the obvious question: if there is no interference in the HKSARG's running of HK affairs, then why would the HKSARG need to rewrite history to conform with the latest view of the LOCPG that it is not bound by Article 22?

Department or not, this is really a distinction without a difference - if the Basic Law allows the CPG itself, but not any of its departments, to interfere in matters which the HKSARG "administers on its own", then that undermines the "high degree of autonomy" promised by the Basic Law and the Sino-British Joint Declaration.

The HKSARG's latest position goes against its earlier advice to the Legislative Council, submitted in January 2007. The advice "provides information on the offices set up in the [HKSAR] by the [CPG] under Article 22 of the Basic Law" and names three, including LOCPG.

Incidentally, in their wisdom, the drafters of the Basic Law didn't put section or paragraph numbers in its Articles, so you have to count the paragraphs to find Article 22(2).