log in
The CFA has ruled that Trading Funds must not seek distributable profit or pay "notional tax". Webb-site finds that the Companies Registry has overcharged users HK$3.6bn since 1998, making up to a 94% return on fixed assets against a target 5.7%. The illegal excess should now be returned by waiving fees, including scrapping the Great Paywall of HK on corporate information. It should not take another judicial review to do so.

Webb-site is celebrating its 20th anniversary this month, and over the years, we have frequently criticised the opacity of the Hong Kong Companies Registry and its obscene monopoly profits, generated from excessive filing fees and from the Great Paywall of Hong Kong on corporate information, against the public interest.

On 27-Dec-2017, the Court of Final Appeal, in a judgment (FACV11/2017) involving another TF (the Communications Authority), confirmed what we had long believed: the registry as a government service was supposed to cover its costs, not make a stonking great profit. As the economies of scale kicked in with increasing usage (statistics here), it should have cut its tariff, but failed to do so. The CFA ruling states that unless the enabling legislation includes the purpose of making a profit or levying a tax, then a TF cannot budget to make a distributable profit or pay a "tax" to the Government, as the CRTF did.

Like the Telecommunications Ordinance, the Companies Ordinance does not authorise the imposition of any tax, so the CFA's ruling applies to the Companies Registry too. Put simply, then, the Companies Registry has illegally overcharged users by failing to revise its fee scales over the years to produce revenue in line with its costs, including a reasonable return on fixed assets. TFO Section 6(6) requires the general manager of a TF (in this case, the Registrar of Companies) to manage it with the objectives of:

Upon establishment by an enabling resolution of the Legislative Council passed on 1-Jun-1993, the Government transferred the registry's assets into the CRTF financed by a Government loan of HK$276.7m and capital of $138.46m, in other words, 2 parts debt to 1 part equity, so that the CRTF could then "pay back" the loan out of its surplus in 10 equal annual instalments of $27.67m up to 1-Aug-2004, with interest. As TFO s2(1) states, a TF is "an accounting entity within the Government (but not having a separate legal existence)", so this is largely just an accounting exercise - the TF is not a company.

As we all know, the risk-free HK$ rate plunged during the global financial crisis of 2008-9, but the FS left the "reasonable return" at 8.3% until 2013, then cut it to 6.7% until 2017 and finally 5.7% in the latest 2017/18 year. Now that the CFA has ruled that it was unlawful for the CRTF to be paying "notional" tax and dividends to the Government, the correct calculation of return is profit before interest income, divided by fixed assets (which are averaged between the year-ends). Webb-site has examined the accounts and recalculated the returns, and we can tell you that in each of the last 20 years, the CRTF exceeded the target return, in most years by massive amounts. Just look at this: 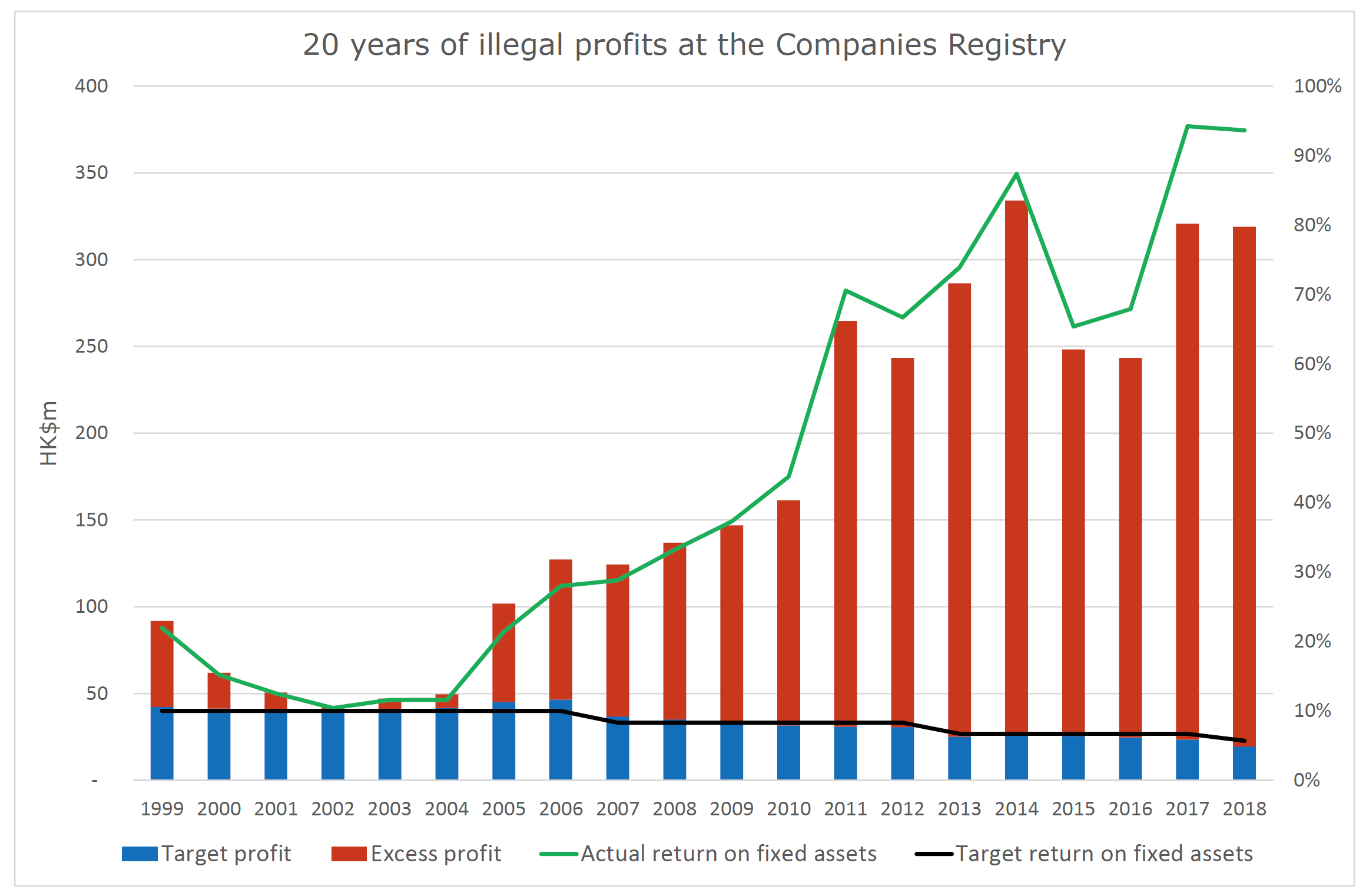 Based on the target rates of return set by the FS, the total target profit for the 20-year period was HK$681m, but the actual profit was $3401m, and that is in "money of the day" (MOTD) - not allowing for the return that customers could have made on the overpayments. So the excess MOTD profit is about HK$2.72bn. Total revenue during that period was HK$8.02bn, so users were overcharged by an average of 51%. In the most recent year 2017/18, the revenue was $648m and the target return (5.7% of average fixed assets) was $19.4m, but the actual surplus was $319m, so users were overcharged by 86% and fees would need to be cut by 46% just to achieve the target return, and then cut some more because when you lower fees, you attract more business at the margin. That's before we begin to contemplate refunding the historic overpayments.

These surpluses were not accidental - it was obvious from 2005 onwards that they were overshooting the target, making a 21.4% pre-tax return on fixed assets that year, and they have not looked back since then, rising to a record 94.2% in 2017 and 93.6% in 2018. The registry adopted a 30% dividend "payout" to Government until 2005, then 50% until 2008 and finally 100% from 2009 to 2017, because the cash was piling up so fast. Investment in fixed assets has been no faster than depreciation charged against income; the fixed assets have actually fallen from about $420m in 1998 to $341m in 2018, despite the introduction of electronic incorporation, filing and search facilities. So it cannot reasonably be argued that the CR needs to hoard reserves for future development. They can pay as they go.

After the CFA ruling in Dec-2017, the 2017 dividend provision was reversed in the 2017/18 accounts and they have stopped paying tax and dividends, instead hoarding the cash, part of which is now deposited in the Exchange Fund run by the HK Monetary Authority and the rest in banks. At 31-Mar-2018, the cash and deposits amounted to HK$1.19bn, and it is growing at the rate of about $6m of profits per week plus interest.

What the Government owes the Companies Registry

The "dividends" and "tax" unlawfully taken by Government in the last 20 years are HK$2,007m and $508m in MOTD respectively, plus interest. As the Government charged interest on its loan at the HK Prime (Best Lending) Rate, it is only reasonable that they should also pay the same rate of interest back to the CRTF on the amounts they took, compounded over the last 20 years. We've done that calculation, and we estimate the total amount due at HK$3.54bn as of 31-Mar-2018, plus interest since then.

What the Companies Registry owes the public

Of course, the purpose of returning the illegal tax and dividends is not to stuff the coffers of the CRTF even further, but to return it to the public, who were overcharged in the first place. Applying the same Prime interest rates to the cumulative annual excess profits over the last 20 years brings us to a total owed to the customers at 31-Mar-2018 of HK$3.64bn, in 2018 dollars. Now although Webb-site has been using the registry all of that time, not everyone has - companies paid fees and then dissolved, and newer companies came along later, so it is impractical to identify everyone who was overcharged and the amount on each transaction.

In the circumstances, after recovering the money from the Government treasury, the morally right thing for the CRTF to do is to return it to current and future users by waiving all fees until the surplus is returned, with interest accumulating on the remaining balance until it is fully returned. The operating costs of the registry were $347m in 2017/18, so allowing for a bit of cost inflation and a 5.7% annual return on fixed assets, it would take about 8-9 years to return the overpayment with a full fee waiver.

By our reckoning, at 31-Mar-2018 the registry only owes the public about $100m more than it paid the Government, so it can still keep about HK$1.1bn of its cash pile for its future development. That represents the cumulative "reasonable return" that it should have made over the last 20 years, for future investment, and goodness knows, they could start by improving ICRIS, the medieval internet search system.

Tear down the Great Paywall of Hong Kong

Of course, waiving all fees, including search fees, would have another huge benefit: transparency, in the fight against fraud, corruption and money-laundering. The Great Paywall of Hong Kong would be torn down, opening up corporate records to full scrutiny by the media and public, and bringing HK into line with leading jurisdictions such as the UK and New Zealand which charge nothing for public data. Once the paywall is removed, the registry should stay open forever. There is only a trivial cost in making electronic records available to the public, because the Government would store them electronically even if they were not open. The public cost of fraud, corruption and financial crime is far greater. The same applies to the Land Registry.

We call upon the Government to do the right thing. Pay back the money you took illegally, and return it to users of the Companies Registry by waiving their fees - and do it before someone brings a judicial review of your failure to do so, almost a year after the highest court in the land ruled against this extortionate behaviour.