log in
We probe the history of the SHKP/Kerry/Paliburg Larvotto, a luxury industrial-cum-residential project overlooking a typhoon shelter but behind boatyards and sawmills, which are noisy enough for the Environmental Protection Department to object to the Town Planning Board's approval, as minutes reveal. "Non-openable windows" were cited as a mitigating measure. Yours for just HK$25k/psf - can you see the bubble?

And the Oscar for most outrageous property launch goes to...Larvotto, a luxury industrial-cum-residential development 15 years in the making, which was auctioned in 1995 for $255 per gross sq ft (gsf), converted to residential use in 2005 for $4,336/gsf, constructed for (let's say) $2,000/gsf and is now being touted at HK$25,000/gsf (including your share of the common areas, the cross-sectional area of the walls, etc). At that price, the whole thing is tagged at HK$22.8bn (US$2.94bn). You can't blame them for trying, but if this isn't evidence of a bubble, then what is?

"How well do you know Ocean?", "View the Ocean, Feel the Ocean" says the marketing, for a development which faces North-East across Aberdeen typhoon shelter, behind some noisy boatyards and sawmills which one day will likely be redeveloped, potentially blocking the view. Most residents will have to crane their necks to see the South China Sea which is, not unnaturally, to the South. 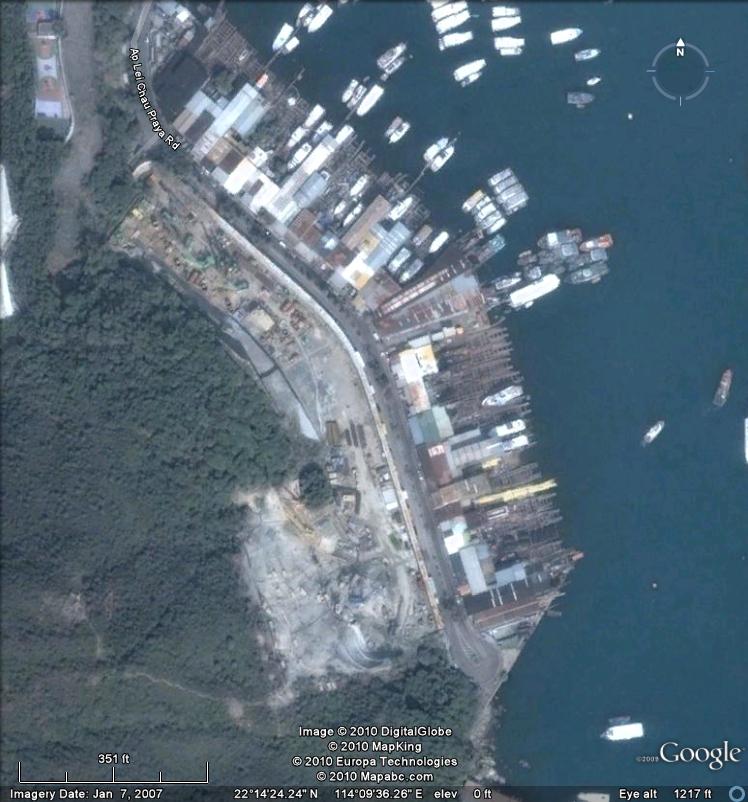 Auctioned to one bidder in 1995 as Industrial

The Larvotto site is Ap Lei Chau Inland Lot 129, or ALCIL129 for short. With a land area of 180,511 sf, it was originally sold for industrial use, in a government land auction on 25-Jan-1995 at the opening bid of HK$230m to Paliburg Holdings Ltd (Paliburg, 0617), via its then wholly-owned subsidiary, Cheerjoy Development Ltd (Cheerjoy). In the 1994 annual report, Paliburg said it planned to build a "modern industrial complex" called "Hong Kong Industrial Trade Plaza" with a floor area of 1,714,800 gsf at a plot ratio of 9.5, so the accommodation value of the land was just $134/gsf.

By the 1996 report, with site formation work nearing completion, Paliburg was beginning to change its mind and by the 1997 report, the application for rezoning for "comprehensive development comprising residential, hotel and commercial components" was "being further pursued". On 3-Oct-1997, the Town Planning Board (TPB) rejected the application, partly because of the noise and the "fugitive industrial emissions" from the boatyards across the road. The application changed to "residential and commercial" by the 1998 report.

SHKP and Kerry Properties buy in

On 30-Jul-1999, the TPB approved rezoning to permit residential development, restricting the site to a plot ratio of 5, so the original premium for industrial use now equated to 9.5/5 x $134=$255/gsf, before conversion. At the same time, the TPB looked across the Ap Lei Chau Praya Road to the site occupied by the Ap Lei Chau Boatyards, which was proposed to be rezoned from "I" (Industrial) to "U" (Undetermined). The developer had got what it wanted.

Two weeks later, on 14-Aug-1999, facing financial pressure, Paliburg sold 70% of Point Perfect Investments Ltd (BVI), which owned Cheerjoy, to Twin Luck Worldwide Ltd (BVI), a 50:50 joint venture between Sun Hung Kai Properties Ltd (0016) and Kerry Properties Ltd (Kerry Properties, 0683). The value of the site was agreed at $570m before conversion to residential use, so Paliburg would receive $399m for the 70% stake, and the new partners would procure financing for the development at market rates of interest or 1.5% over HIBOR (whichever was higher), relieving Paliburg of that burden. $99m of the payment was deferred pending publication of the zoning approval.

Given that this was announced just 2 weeks after the Town Planning Board approval, it would be interesting to know whether negotiations were already underway at the time of the approval, and if so, whether any of the members of the TPB had any commercial relationship with the two new partners.

The Outline Zoning Plan reflecting approved Residential (Group E) zoning was amended on 3-Mar-2000, and required further TPB approval of the actual residential development plan "with a view to minimizing the possible industrial/residential interface problems". However, there were numerous objections from the boatyard operators, and the TPB reverted the zoning of the boatyard site to "I" (Industrial) on 26-Sep-00. The Outline Zoning Plan was approved by the Chief Executive in Council on 2-Mar-01.

However, on 16-Jan-04, the TPB overruled the MPC and approved the plan, which by now included an additional 1,000 square metres of retail space (increasing the plot ratio to 5.06) and 3,000 square metres of club house (which is exempt from plot ratio), despite the objections of the Environmental Protection Department.

In a classic bureaucratic override, the TPB had approved the project even though the Environmental Protection Department did "not support" it. In bureau-land, they never use the word "object". The EPD was opposed because the noise from the "unauthorized" steel boat repairing activities in the boatyards, which are only 30 metres away, exceeded the noise limit in the Hong Kong Planning Standards and Guidelines (HKPSG).

The noise problem had been discussed at the TPB meeting on 16-Jan-2004 when the scheme was first approved on review. The applicant had incorporated "mitigation measures" including "non-openable windows", but towers 1 to 3 of the 9 Towers would still exceed the HKPSG noise limit and nothing further could be done. It was noted that the boatyards provided "supporting services to the Aberdeen fishing industry" and that the Short Term Tenancies of the boatyards prohibited steel boat repair (presumably allowing wooden boats), but this was "difficult to enforce".

In a Planning and Lands Department report in 2006, the boatyard site was considered further. There is a small sliver of land, just 0.05ha (or about 5,300 sf) visible on the ownership plan on page 3 of the PDF, which is under single private ownership and used for "temporary" shipyard. The remaining 2.34ha is Government land leased out on Short Term Tenancies for "temporary" shipyards and two sawmills. The shipyards had been there for "over 15 years" (now over 19 years) and there are "practical difficulties" in their relocation.

Why should anyone on a short-term tenancy expect permanent occupation rights? Could it be that there are other interests at stake here, such as the redevelopment potential of those boatyard sites and demands for compensation?

We pause to note that the Agriculture and Fisheries sector has 40 seats in the 800-member committee which elects HK's Chief Executive, or 5% weighting, vastly disproportionate to the sector's economic significance - it accounts for just 0.1% of GDP. The 40 seats were returned uncontested in 2006. The electorate comprised just 160 organisations in that year, 77 of which are named in Appendix B of the guidance notes on registration. This neatly illustrates one of the design features of HK's Election Committee. Apart from tycoon representatives, it is stuffed with over-weighted sectors which depend heavily on government support, such as agriculture, fisheries, sports, performing arts and culture. There is inevitably reciprocity in government policy in return for political support.

Larvotto is named after a region and beach in Monaco, a place about as densely populated as Ap Lei Chau, so it is fitting in that sense, but unless you enjoy "unopenable windows" or the pleasant sound of saws on steel in the mornings, you might prefer not to pay $25,000 per sq ft (plus stamp duty), or anything like that, for this "inherent supremacy blessed by nature" - especially when it's only on a 37-year lease. Ah yes, Hong Kong's dwindling leaseholds - we'll get to that another day.