log in
Legislators should this afternoon refuse to sanction the HK Disneyland financial restructuring unless they get full disclosure of the Government-controlled theme park's accounts, plus a release of 60 hectares of valuable public land which would otherwise stay under option to the park for 20 more years. This land should then be tendered for competing and synergistic leisure use.

This afternoon HK legislators in the Council's Finance Committee will be asked to suspend their disbelief, wish upon a star, and imagine why they should approve the debt restructuring exercise at Hong Kong International Theme Parks Ltd (HKITP), the Government-controlled joint venture which owns Hong Kong Disneyland, without extracting some serious concessions.

Of course, the Government would not admit that HKITP would be insolvent without debt relief, and has never published its accounts, so it remains a "state secret" as to exactly how much it has lost and how much it has paid (or agreed to pay) The Walt Disney Company in royalties and management fees since the park opened in 2005. Instead, they camouflaged the financial restructuring announcement on 30-Jun-09 by headlining the deal as an expansion plan for HK Disneyland.

While it will involve several new rides in three "lands", these are all part of the originally intended "build-out" of Phase 1 of HK Disneyland. We've taken the new area in the conceptual plan published by the Government, and superimposed it on a satellite photo taken around February 2009 (click it to enlarge): 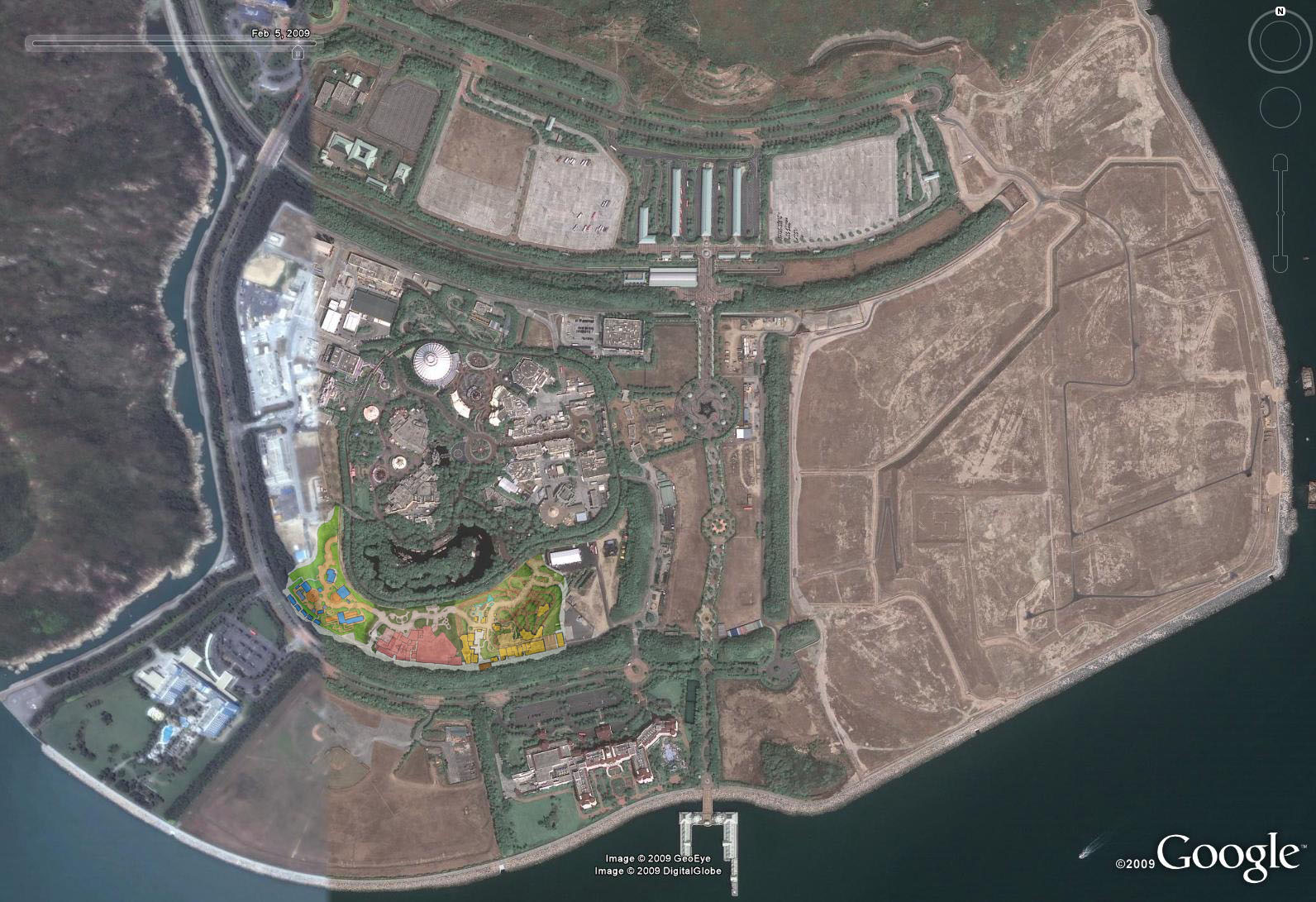 In the left half of the picture we have Phase 1 of Disneyland, including land for hotels at the bottom (South), of which two are built, and the coach-park and car park at the top. The actual theme park area that a normal visitor would see is the small area in the centre with a miniature railway track around its perimeter and the white-domed Magic Mountain roller coaster ride at its Northern edge, plus 3 attractions just outside the railway to the North-West (Autopia, Small World and Golden Mickeys). In all, we estimate from satellite measurements that the existing attractions occupy just 23 hectares of the site. The new attractions will be in the more colourful part below the South-West corner of the existing park, just below the Adventureland lake, on land which was deliberately left vacant for the build-out of Phase 1.

Running North-South down the middle you see Park Promenade (with bare land either side of it - perhaps for future attractions), and to the East of that, hidden by trees when viewed at ground-level, is a massive landfill, 60 hectares in size, completed last year and known as "Phase 2". This is owned by the Government, but under the Dec-1999 Project Agreement, HKITP has a 20-year option to buy it at the reclamation cost of HK$2.8bn (plus inflation). The option can automatically be extended for 5 years and conditionally for a further 5 years (if park attendance is more than 8 million but less than 10 million), so the option could run until 2029.

It is quite obvious that the existing park is unable to service its existing debt, hence the request for the Government to convert $5.9bn of it into shares and give up the interest. It was not proposed that the expansion be debt-financed, even with the existing debt having been converted to equity. One can only assume, in the absence of published accounts, that the park generates just enough cash to cover its operating expenses but not to finance any expansion. Given the looming competition from Shanghai Disneyland, which will have far more land at its disposal, together with other destinations, it seems unlikely that HK Disneyland would ever be able to justify, on financial grounds, exercising the option to purchase and build out Phase 2. So we face the prospect of watching 60 hectares of public land sit empty for 20 years, or be subject to low-rent short-term projects like golf driving ranges. We've had enough of those at Kai Tak and what we like to call the "West Kowloon Cultural Desert".

The Secret deal with Disney

The Government's briefing paper for today's meeting does not even mention the crucial issue of the Phase 2 land and the option hanging over it. What it does confirm is that, as previously rumoured, Disney has been getting a management fee of 2% of gross revenue plus between 2% and 8% of Earnings Before Interest Tax, Depreciation and Amortisation (EBITDA), although it doesn't tell us what criteria determine whether it is at the 8% or 2% end of that range. This will be replaced with a simpler 6.5% of EBITDA (and no percentage of gross revenue).

However, what the paper does not disclose, but media reported when the project was launched, is that Disney also gets a 10% royalty on all ticket sales plus 5% on all food, beverage and merchandise sold in the park. These reports have not been denied. On top of that, there are the usual license fees it collects from manufacturers of the merchandise.

So the briefing paper is misleading legislators by omission - you can hardly trumpet the fact that Disney no longer gets 2% of gross revenue without disclosing the royalties it creams off the top of all sales. Legislators and the public should be provided with full information, including the accounts and agreements, on which they can make a decision. If this briefing paper were a prospectus for an investment, it would never get past the SFC - and yet that's exactly what it is - a request to convert interest-bearing debt into an investment in further equity. The payments to Disney are related-party transactions, and investors have a right to know the details.

What Legislators should do

Legislators have a unique opportunity to intervene in this situation, as the restructuring agreement needs the approval of the Finance Committee to convert debt into equity. Legislators should require, before approving this, that the Government obtains the following concessions from Disney:

The Hong Kong public have a right to know, and this is a unique chance to tear down the wall of secrecy surrounding the Hong Kong Disneyland project and to retrieve 60 hectares of valuable public land. Finally, let us not forget that it was Donald Tsang's 1999 budget speech (back in the Tung Dynasty) which launched this project, along with the Cyberport. With two such successful projects behind him, we have no doubt that he can exercise his central planning skills (motto: "government leads, market facilitates") to find a new use for this land in one of his pet sectors.