log in
The so-called "Consumption Voucher" will probably become another cash handout, a total of HK$108bn over 2 years - but that's not the point. HK's budget has long since deviated from the Basic Law requirement to keep the budget in line with Gross Domestic Product over time, having expanded by over a quarter since the 1997 Handover. HK is becoming a tax-and-spend interventionist economy, departing from the free-market principles at the root of its success.

The Government's madcap handout of so-called "Consumption Vouchers" of HK$5,000 to each Permanent Resident and "new arrival" (from the Mainland), at a total cost of HK$36bn, is just another warning sign along the economic Road to Serfdom that the Government seems hell-bent on pursuing, driving the budget to a structurally higher level in breach of the Basic Law requirement to "keep the budget commensurate with the growth rate of its gross domestic product" (Article 107).

"In view of the current special situation, the Government should make good use of the fiscal reserves to energise the market, stimulate the economy, and facilitate the speedy recovery of the consumption market and other economic segments in a timely manner. After careful consideration, I will issue electronic consumption vouchers in instalments with a total value of $5,000 to each eligible Hong Kong permanent resident and new arrival aged 18 or above, so as to encourage and boost local consumption. This measure, which involves a financial commitment of about $36 billion, is expected to benefit around 7.2 million people. The Government will identify suitable stored value facilities operators to help roll out the scheme, and will announce the details of the scheme as soon as possible."

It was clearly added to the budget at the last minute and is not a fully-developed plan. Subsequent reports say the handout will be $1K per month which expires each month. The "vouchers" can be spent with offline or online local merchants, including but not limited to restaurants and supermarkets, but not overseas merchants. Our bet is that this is NGTH - Not Going To Happen, and will be replaced with a simple cash-to-bank scheme like last year's, for the following reasons:

The handout is a wasteful use of HK's fiscal reserves, because it sprays money at the entire population, rich or poor. Over 90% of the workforce is still employed and in roughly the same financial situation as before COVID-19 - except that they haven't been spending much on foreign holidays and less on bars, gyms, cinemas, restaurants and other things that have been periodically closed by Government order.

The HK$36bn handout is a significant chunk of money, about 1.3% of estimated GDP for 2021-2022, adding to the $72bn cost of last year's handout. So as its expenditure grows, the Government reaches for an easy target and jacks up stock market stamp duty by 30% - raising roughly an extra $13bn per year (depending on market turnover). 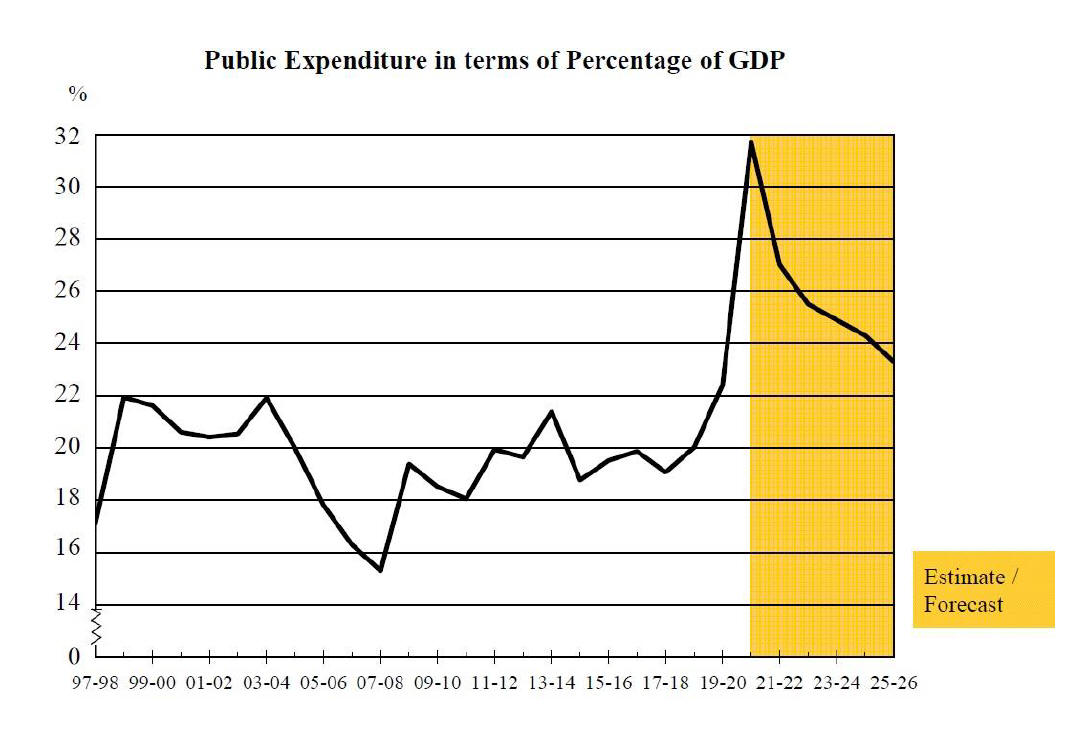 By comparison, here's the same graph from the 1997-98 Budget Speech - notice how the upper bound of the graph is 20%: 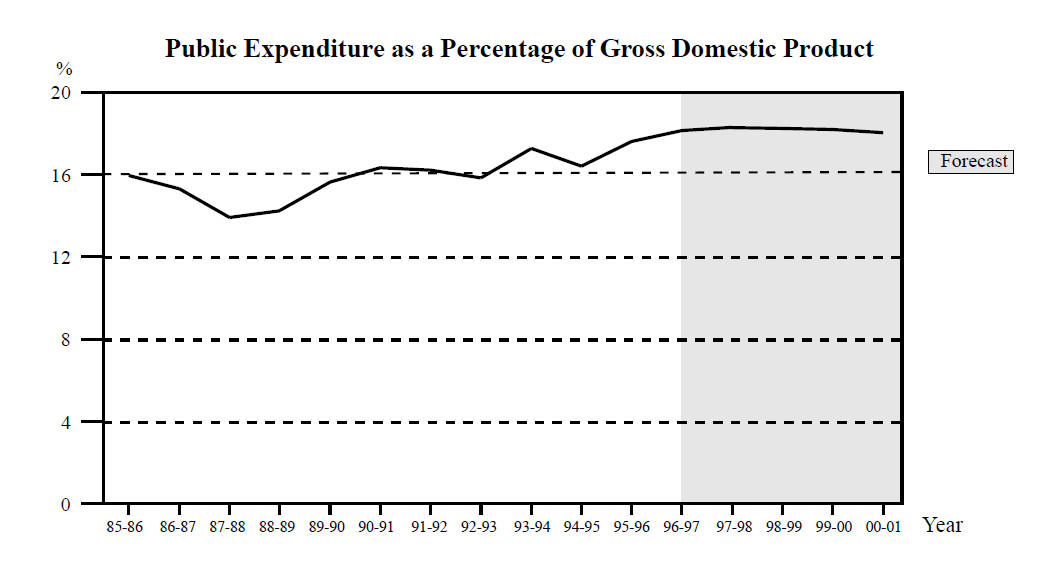 There's actually no reason why HK couldn't balance its books this year and next, but that would be involve being far more sensible, focusing on the needy, stopping needless handouts to the needless, and also stopping wasteful interventions to push the economy in one direction or another with subsidies for "re-industrialization" or "innovation and technology". amongst others.

Just a small example - in the amazing-but-true sections of the budget, you will find a plan to pay property tycoons a subsidy of HK$8m for each Real Estate Investment Trust (REIT) that they create for the stock market. Yes, really. Whatever next - a subsidy for launching IPOs? There are continued subsidies for bond issuers (para 75), so it seems that equity subsidies can't be far away. Why not just let the free market function?

Set aside the political issues of the last 2 years. What's really happening is an ongoing slide towards big-budget central planning, mainland-style, far from the free market approach that powered HK's economic growth in the past.