log in
So it was her house and her basement? We dig deeper into York Road and explain why it matters.

What sticks in the public's throat most about CE candidate Henry Tang Ying Yen's scandals? It is probably not so much that he cheated on his wife, which at least don't involve financial gain, but the scale of the unauthorised building works at 7 York Road, and the fact that he initially lied about it and then allowed his wife to shoulder the blame. The house, completed in 2007, has a basement of hidden underground rooms, reportedly including space suitable for a wine cellar, tasting room, home theatre, gym and whirlpool bath. After an initial inspection, the Building Department announced on 17-Feb-2012 that the basement was about 19m x 11m x 3.5m high. That area of 209 sq m is 2,250 sq ft, which is the figure you've seen in the media, but it is probably an internal measurement, so to convert that into saleable area you have to add the thickness of external walls - say 23cm, which takes it up to 2,400 sq ft.

"Tang said that there was a garage in the basement of his family's property at No 7 at the time of purchase, and the family carried out digging works to deepen the garage for storage...He admitted the excavation work may have been too deep and he has hired a professional to investigate."

If that report is accurate then it reflects misleading statements, because the site was purchased in 2002, and whatever garage existed then must have been demolished when the new home was built.

5A York Road was acquired by Bluehouse Investments Ltd (Bluehouse, BVI) for HK$46.5m in 1996 and 7 York Road was acquired by On-Power Ltd (On-Power, BVI) for $36m in 2002. In his 21-Jun-2004, 26-Jun-2006, 1-Jul-2007, 26-Jun-2008 and 23-Jun-2009 declarations of interests, Henry Tang was a director of both companies and held one of the two shares in each company. His wife presumably held the other share in both companies. The companies held the properties "for self-use". By his declaration on 25-Jun-2010, he no longer had a shareholding in On-Power and he held both shares of Bluehouse. Tang has said that he and his wife were having difficulty communicating - but clearly not so much difficulty that they were unable to arrange a share swap, and apparently not so much difficulty that she moved into No.7 - because they have said that it was kept empty.

Policy note: holding the properties through offshore companies allowed the couple to legally avoid stamp duty on the transfers of half-interests in the houses. As we've said before, stamp duty should be abolished, partly because it is a tax that the wealthy can avoid anyway through corporate structuring, as long as the transferee trusts the transferor to guarantee that there are no hidden liabilities in the property-owning company. Perhaps, given that Henry Tang has shown how to avoid  stamp duty, he will see the wisdom of abolishing it if he becomes CE.

But the interesting thing about all this is that, having separated the ownership of the two houses, Henry's efforts to portray 7 York Road as "her house" with her basement, and 5A York Road as "his house", are somewhat undermined by a look at the Valuation List at the Ratings and Valuation Department, which is now open for inspection. This shows that the two houses are rated as a single tenement (or dwelling). To save you the pain of navigating the arcane site which is only open for viewing from mid-March until 31-May (or about 7 weeks) each year, here's what you get:

Being rated as a single tenement, there is a single rates bill for the combined houses. A check of the property information behind the pay-wall reveals that the combined saleable floor area is 722.4 sq.m., or 7,776 sq ft. So the rateable value is HK$425,000 (US$54,768) per month or about $54.66 per sq ft. Presumably that floor area excludes the newly-discovered 2,400 sq. ft. of basement, which bumps it up to 10,176 sq ft. One might make a generous discount (say 50%) for the fact that it is mostly underground, but that still means the extra space is worth about $27.33 per sq ft per month, so call that a rateable value of $787,104. Being in New Kowloon, the ground rent on the land leases, payable to the Government as landlord, has since 1-Jul-1997 been 3% of rateable value, and the rates are 5% of rateable value, making a total of 8%, which means that the couple has been underpaying rates and rent by about $63k per year at current levels (less in the past).

Then there's the bigger issue that House 7 probably breaches the plot ratio in the outline zoning plan, which zones the land R(C)1, with a maximum plot ratio of 0.6, although it does allow 3 stories. We can safely assume that the visible part of the house maximised the plot ratio.

7 York Road was purchased by On-Power in a mortgagee sale by Chong Hing Bank Ltd (1111). The agreement was dated 17-Jun-2002, just 2 weeks before Henry Tang joined the Government as Secretary for Commerce, Industry and Technology on 1-Jul-2002. The previous owner, Hing Lee Construction Co Ltd, bought the site on 14-Nov-1996. Hing Lee went into liquidation on 12-May-1998 and the company was dissolved by creditors' winding-up on 2-Jul-2004.

Henry's Basement matters for the simple reason that most people in HK, if they can afford to buy rather than rent property, spend a large part of their careers paying off the mortgage on a flat typically one third of the size of Henry's Basement. The price they pay reflects the land premium which the developer paid to the Government for the amount of floor area they were permitted to build. Mr & Mrs Tang paid no such premium for their extra floor area, or rates and ground rent on it afterwards. He's cheated the system and the people.

Of course, the Tangs aren't the only ones with illegal additions to their houses, but then not everyone is running for Chief Executive. When your editor shopped around the housing market a few years back, about half the houses we viewed had some form of illegal floor area - sometimes an extra floor on top, sometimes a permanently glassed-in terrace or balcony, and sometimes a basement beneath. Most non-reclaimed land in HK is on a slope, so by design, houses are often built on stilts with longer stilts at the front to level the platform, and this leaves room for basements underneath, sometimes dug back into the hillside. These are of course very difficult to detect from the air.

The result is that houses often sell for substantially more per sq ft than you might expect, even after allowing for the outdoor area and not having neighbours walking on your ceiling as flat-dwellers have. Buyers are factoring in the hidden floor area not seen in the headline calculation, or the potential for that floor area. They feel almost obligated to exploit it to justify the price they paid. Developers in turn make special effort to leave enough space under the stilts for additional space to be created after the the occupation permit has been granted. This culture has developed because often all that the Buildings Department has done when it finds an illegal structure is to decide that it is not unsafe, and then place a warning letter on the land registry, which still allows the enlarged property to be transferred freely, albeit with the risk that it will one day be enforced.

Sometimes the Buildings Department does take action against what it regards as illegal structures, and sometimes the owners appeal to Buildings Appeal Tribunal. In fact appeals happen so often that the Panel of members who sit in such cases currently amounts to 463 people, which makes it the biggest statutory body in HK. A current list of appellants includes William Duncan Stone, who happens to be a High Court Judge. On 1-Dec-2011 he was appointed as a Chairman of the Market Misconduct Tribunal. Another appellant, who happens to be his neighbour, is Richard Arthur Witts, who often appears as an expert witness in the MMT, and tells Webb-site that the case relates to storage cupboards on his roof. Well if the Buildings Department is tackling that, then they can tackle anything.

Whether or not Henry Tang is appointed as Chief Executive, there will likely be an ongoing investigation into:

The first issue should be easy to prove - it is clear that the basement was not approved, and beyond belief that neither of them knew that it was being built. According to his filings, Henry Tang was a director of On-Power at the relevant time and his wife has said publicly that she oversaw the construction. The second possible offence may depend on forensic evidence obtained by further inspection of the building, so let's hope the authorities don't allow the basement to be filled in until the case is over.

The law is explained in more detail in a paper filed by the Government with LegCo, pages 3-6. Regardless of whether Henry Tang becomes CE, if the Government fails to prosecute, then the public interest in this case demands that it must explain why. It is then possible that someone would step in and launch a private prosecution, as Grenville Cross SC, former Director of Public Prosecutions, recently pointed out. If Tang does become CE, then the focus will be on how the Government's decision to prosecute or not is made.

As a result of the focus on Henry Tang's address, we have also noted that right opposite his house, at 6 York Road, is the Kowloon Sub-Office of the Liaison Office of the Central People's Government in the HKSAR. Can this really be a coincidence? We wonder when and why they moved there (presumably some time after 1-Jul-1997) and whether they noticed anything as the builders came and went from number 7.

We couldn't help noticing that Donald Tsang's snappily-named Independent Review Committee for the Prevention and Handling of Potential Conflicts of Interests (like whether or not to prosecute your wife) is up and running with a web site and this image on the home page: 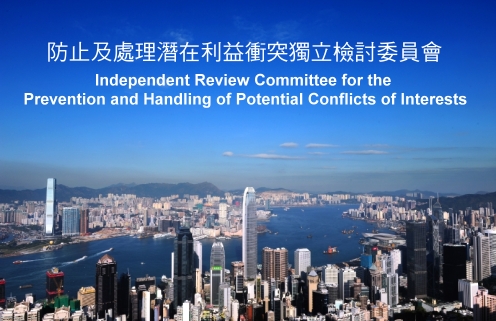 What would otherwise be a beautiful scene (with a blue-tinted sky) is marred by a thick brown layer of smog. How apposite.