log in
After raw-nerve responses from CMBC Capital (1141) and China Soft Power Technology (0139) to our Huarong-CMB network diagram, we zoom in on their network and also look at CMBC's exposure to the controller of 3 more listed companies.

Two of the companies in Friday's Huarong-CMB network diagram made defensive announcements that night.

In its Friday announcement, CMBC Capital Holdings Ltd (CMBC, 1141) reminds the market that, since 30-Jun-2018, its parent group, China Minsheng Banking Corp Ltd (CMB, 1988) has subscribed 1.35bn new shares at HK$0.363 per share for proceeds of HK$490m, a deal which completed on 15-Oct-2018. The subscription was first announced on 3-Jul-2018, alongside a smaller "best efforts" placing to independent parties of up to 830m new shares at the same price.

The issue price represented a 19.5% discount (close to the maximum 20%) to the 5-day average closing price before the placing. The four placing agents, despite the discount and their "best efforts", only procured placees for 577.22m shares, 69.5% of the target amount. The placing completed on 20-Jul-2018, raising HK$205m net. The placed shares represented 1.25% of the enlarged shares. These facts are omitted from yesterday's announcement. CMBC instead states:

"The completion of the Placing of New Shares and the Subscription of New Shares demonstrated the full confidence of relevant investors and the controlling shareholder in the future development of the Company."

None of the placees has been identified. The subscription by CMB represents only 2.83% of the enlarged shares. CMBC also states that based on the 30-Jun-2018 interim report and the two equity issues, its pro forma net assets are HK$1791m. True, although pro forma net tangible assets (NTA) are slightly lower at HK$1769m. However, they fail to mention that there are now 47.706bn shares in issue, so there are net assets of only $0.0375/share and net tangible assets of $0.0371 per share, and in our view, the shares should be trading at a discount to NTA.

The balance sheet at 30-Jun-2018 included $3492m of loans and advances, and $3375m of financial assets, of which $2470m were debt investments and $455m were listed equities. None of the debt or equity issuers were identified in the interim report. There were also margin loans of $957m, of which the largest client represented 19%. The margin loans were secured on pledged securities of $3937m. We don't know whether any of the pledged securities were shares in CMBC itself and whether any of the clients took shares in the placing.

As we mentioned on Friday, CMBC relies heavily on financial support from CMB. We should add that on 2-Aug-2018, CMB increased its credit line to HK$8bn. The bigger question is why CMB, a bank with a HK banking licence, needs to set up a separate listed entity to make loans. Does this put the loans into a separate approval process, perhaps? Are there things that CMBC can do, that CMB cannot? And who has benefitted from the bubble in CMBC's share price?

Mr Fu controls 29.2% of Dongyue Group Ltd (Dongyue, 0189),  67.8% of Macrolink Capital Holdings Ltd (0758) and 46.19% of New Silkroad Culturaltainment Ltd (0472). The name itself is entertaining - or desperate, definitely one of those. On 9-May-2014, Dongyue subscribed RMB1bn for a 2% stake in China MinSheng Investment Group Corp Ltd, a PRC private entity "principally engaged in equity investment and assets management".

In its Friday announcement, China Soft Power Technology Holdings Ltd (CSPT, 0139) admits that it did borrow from a wholly-owned subsidiary of China Huarong Overseas Investment Holdings Co Ltd (Huarong Overseas) while it was buying shares in CMBC, but "the loan was fully repaid in July 2018". We checked, and this is indeed supported by a disclosure of interest as of 12-Jul-2018 in which Huarong Overseas ceased to have a security interest in 1.8bn shares of CMBC, which had been pledged to it by Main Purpose Investments Ltd and Desert Gold Ltd, two 100% subsidiaries of CSPT.

CSPT says the purchases of shares in CMBC since Oct-2017 were "funded by the internal resources of the Company" - but its resources of course included borrowings from Huarong Overseas, to which it pledged 1.8bn CMBC shares, as shown in disclosures of interest by Huarong Overseas and by CSPT on 5-Jul-2017.

However, we should also note that our diagram showed a loan facility to CSPT from Future World Financial Holdings Ltd (FWF, 0572) of HK$150m. That was outdated, because on 25-Apr-2018, FWF announced that it was increasing the unsecured loan facility to HK$270m, or HK$291.6m including 8% p.a. interest in arrears. This was announced on the same day that FWF completed the acquisition from CSPT of a company which owns a house at 1 Lincoln Road, Kowloon Tong, in exchange for new FWF shares, increasing CSPT's holding in FWF to 18.78%.

In the other leg of the cross-holding, FWF owns 7.27% of CSPT and has a securities margin account at CSPT's 100%-owned broker, Central Wealth Securities Investment Ltd (CCASS holdings here), with a maximum margin loan of HK$100m. FWF owns 4.39% of CMBC at 30-Jun-2018. The connected transactions with CSPT, including the expanded loan facility, were approved in an EGM of FWF on 6-Aug-2018.

The Chairman of CSPT, Chen Xiaodong, is CEO of FWF. His cousin Cai Linzhan is an ED (formerly CEO) of FWF. Mr Chen's aunt Ada Lee Chau Man is an ED of CSPT. Another individual, Mr Yu Qingrui, is an ED of both CSPT and FWF.

Next, we need to adjust for the FWF-CSPT cross-holdings. It may take you a moment to get your head around this. When two companies issue shares to each other in a share swap, no cash comes out of the market, and no value is added to the underlying net assets of the two companies, but by accounting magic, each of them records an increase in their balance sheet net assets, based on the market value of the cross-holdings, because there is no increase in liabilities. However, if someone then comes along and buys all the external shares of both companies apart from the cross-holdings, then they would own the entire underlying assets of both companies and the cross-holdings would cancel out. The same would happen if the two companies merged, each receiving shares in a Newco which would own them both. In astronomical terms, a cross-holding between two companies is like the gravitational pull between binary stars. If A and B owned 90% of each other's shares, then the outside holders of A would have a 52.6% interest in the assets of A and a 47.4% interest in the assets of B, and vice versa. The stronger the cross-holding, the closer they are to a full merger (or a black hole, depending on size).

A perfect example of such a share swap actually comes from FWF and CSPT, which by coincidence had similar share prices at one point, so on 27-Jul-2017, they issued 470m shares to each other valued at $0.11 each.

We'll spare you the maths, but the result of eliminating the FWF/CSPT cross-holdings to calculate the underlying NTA per share based on the external shares is shown below. 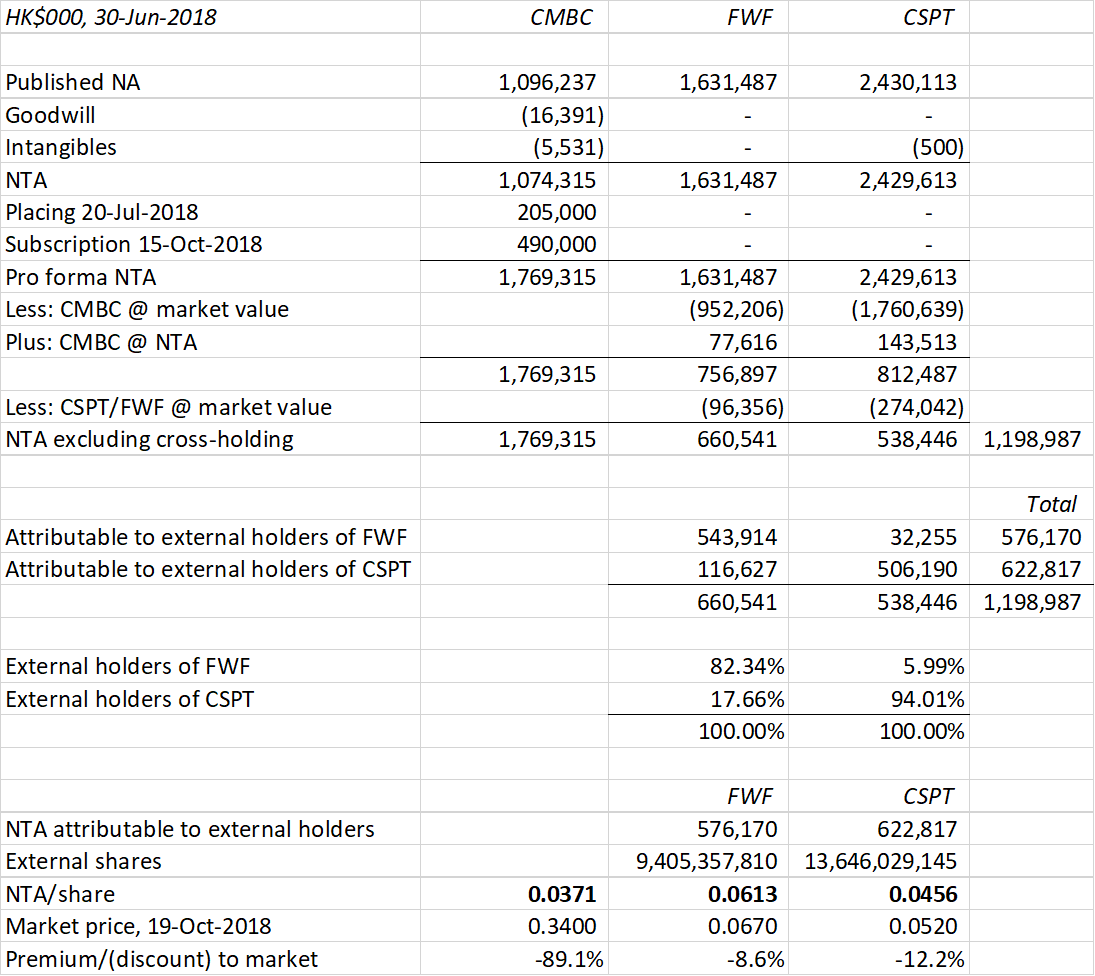 In our view, all of these stocks should trade at substantial discounts to underlying NTA because of their corporate governance history. The only thing that might compensate for this in the case of the small ones (CSPT and FWF) is the listing value or shell potential, but don't hold your breath waiting for that, as the regulators are cracking down on such transactions.