log in
Sometimes, all you need to tell a story is a picture.

Sometimes, a picture is really all you need to know why you should not invest in a company, or in this case, 50 HK-listed companies in what we will call the "Enigma Network". In the diagram below (click or zoom your browser to get the fully glory), some of them are known bubbles, on which the SFC has issued concentration warnings. It is remarkable that despite those warnings, the listed companies which own those shares continue to hold them. They will probably do so until the bubble bursts, because the gains on such stocks are not actually intended to benefit their shareholders. The people who engineer such bubbles have other plans.

In other cases of non-bubbles, there are multiple holdings below the normal 5% disclosure threshold which when aggregated, provide significant voting power when the companies seek approval from "independent" shareholders to do something that might not make sense to others.

This network has come into view only because, about a year ago, in frustration with the opacity of many balance sheets, Webb-site began filing complaints with the Stock Exchange that the for-profit regulator had failed to enforce a Listing Rule which requires annual and interim reports to disclose "significant investments held, their performance during the financial year, and their future prospects". On the Main Board, that is Appendix 16, paragraph 32(4) for annual reports and paragraph 40(2) for interim reports. On the GEM, that is Listing Rule 18.41(4) for annual reports and Listing Rule 18.59 for half-year reports. There is no definition of "significant" in those rules, but some inspiration can be drawn from paragraph 23 of Appendix 16, which requires details of properties held for development or investment where the property exceeds 5% of total assets. In the case of stock investments, one might also have regard to an investment gain or loss on a stock exceeding 5% of the profit or loss for the year as being "significant" and therefore requiring disclosure of that stock.

As a result, more disclosures have been made in the recent interim and annual reports of these companies, although some of them are now taking steps to obfuscate that by stuffing the investments into discretionary-managed "segregated portfolio" companies (SPCs) so that in future, they might only disclose holdings in the SPC, unless the regulator pays close attention and requires underlying investments to be disclosed.

Spot the concert parties: under the SFC's Takeovers Code, where a group of shareholders acting in concert acquires more than 30% of the voting rights in a company, a general offer to buy all the other shares is normally required. There are several companies in this diagram where this might have occurred, if one regards the shareholders as acting in concert - and we have not included any of the human shareholders who might also be counted towards the totals. If the corporate shareholders are not acting in concert then it is an extraordinary coincidence that they have picked many of the same stocks in which to invest. The SFC should be taking a close look at this network.

The bottom line, for serious or professional investors, is that they regard any stock market investment by listed companies as highly inappropriate, unless of course the company is established as an investment company. It takes the company beyond its area of management expertise. Investors expect listed companies to focus on their core competencies, and return surplus capital to investors, so that they can invest it. 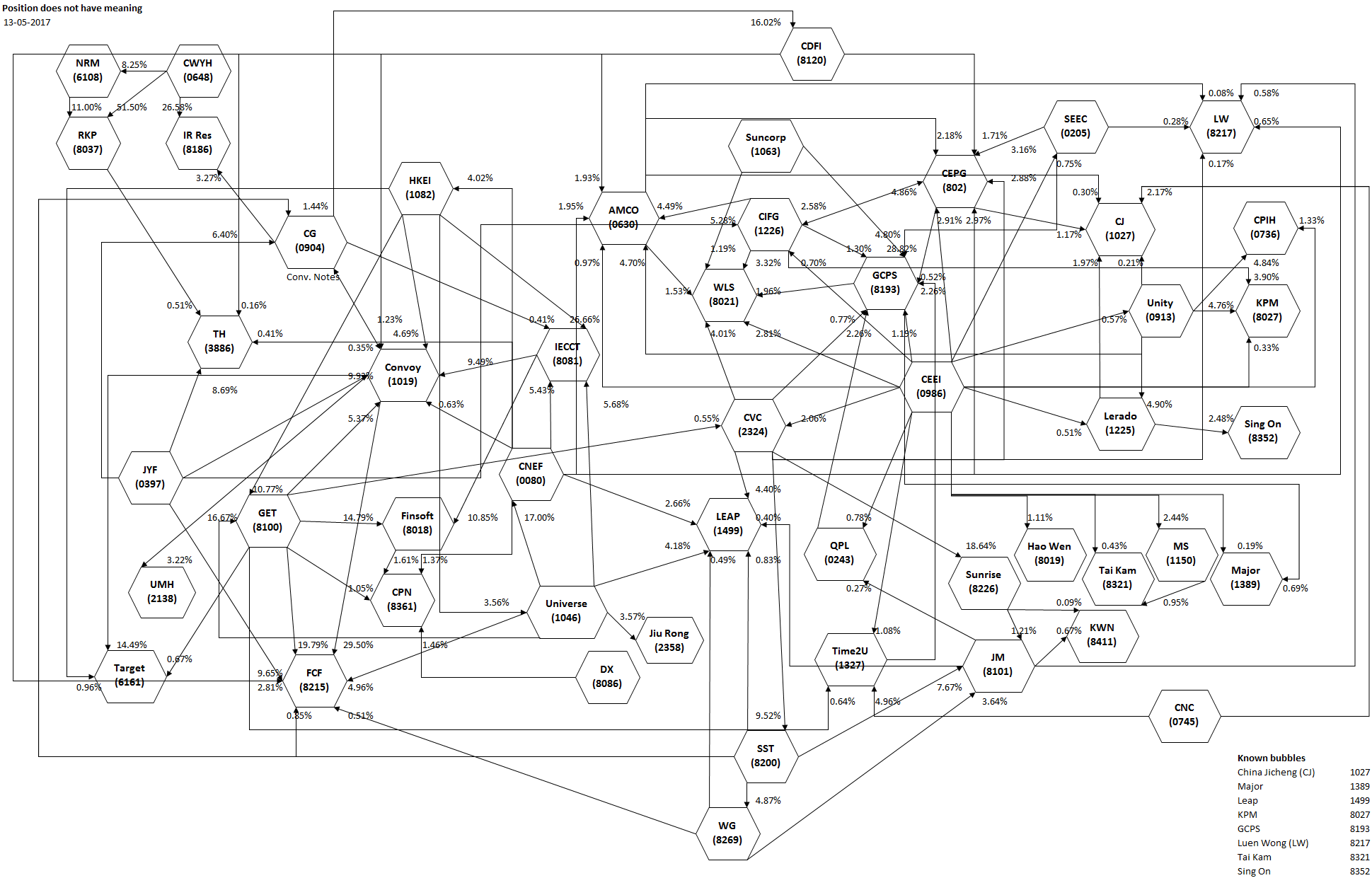